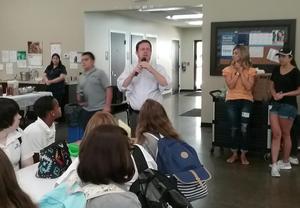 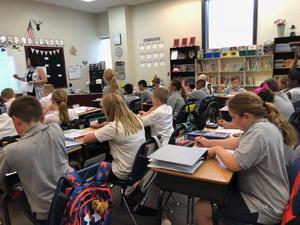 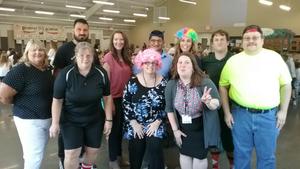 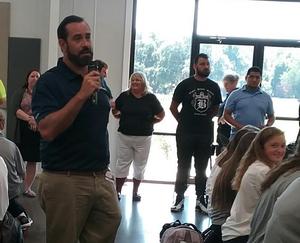 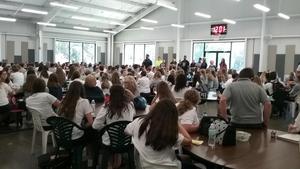 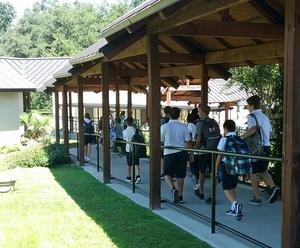 by Belmont Academy Student Journalism Team
Over 500 of Columbia County’s top students left summer vacation behind and returned to see friends and faculty for another exciting academic journey at Belmont Academy on Monday, August 6th, 2018.

Kindergarten through 12th graders could be seen finding their way on their first day. No matter the age, there is always something to learn at school, even if it is how to dress for success. The week’s first event started at secondary lunch, with a what-not-to wear fashion show. Belmont’s top faculty models strutted down the lunchroom in shorts, visors and rainbow wigs. While making the students laugh, they demonstrated the importance of looking and acting professionally while at school. During the secondary lunch, Mr. Drew Sloan, the new Director of Discipline, spoke to students about the importance of good behavior and Principle Barker inspired the students with his vision for the academy.

Later in the week, Mr. Sloan and Mr. Barker took some time to sit with Belmont’s student journalism staff and answered some questions.

When discussing discipline at Belmont, Mr. Sloan said “The most important thing is paying attention to the teachers and listening to what they have to say, and also following the behavior matrix, which is our guideline for how you should be acting in the classroom.”

When asked about the secret to success, Mr. Barker said, “It’s mostly the teachers and the parents and how involved they are. I really give the students credit. It’s the student’s scores that gave it that ranking. You guys, the students, are amazing.”

The word on the street was that students wish summer was longer, but it was good to be back with friends and teachers.

When asked how their first week back at school was, Rolando Dominguez said it was good and that his favorite class is science with Ms. Adams. Kindergarteners, Savannah Lock and Owen Boone said that they had a good first week and they both love recess!

Other first week festivities included a parent cross country meeting on Thursday and the BACS cafe reopening on Friday.

At the cross country meeting, around 50 people came to show support for the program. Cross country has been very successful at Belmont Academy. Last year, elementary school boys and girls earned the title of state champions.

Ms.Shannon Sawyer, the cross country coach, said, “We had 36 runners from all ages and abilities participate in Belmont Cross Country last year. We won a total of five meets. Grades one through eight are eligible to compete. High schoolers can run with us. We have great kids, parents and of course coaches. Any and all are welcome to join. It’s not where you start, it’s when you finish.”

The Belmont Academy Charter School (BACS) Café opened on Friday. Students could be seen walking around with smiles and delicious treats. The café first opened in the spring of 2017. 100 percent of all profits from BACS go back to support the school. The café is open every day during secondary lunch and on Friday for elementary students. Students from the leadership class work in the cafe. The leadership class also runs BACS Biz, which creates school spirit apparel through the BACS Biz online store. Last year, BACS biz and the café sponsored the school robotics team, archery team, high school prom, Belmont backyard bon fire event, secondary honor roll prizes, fourth grade activities grant, third grade centers grant, outdoor classroom and gave a $500 college scholarship to one Belmont graduate.

BACS Cafe Director, Laura Lashley, who is also the 6th Grade and Leadership teacher, said that the program allows “students to learn about business, philanthropy and they get to practice work and leadership skills by working in the cafe and by planning school activities.”