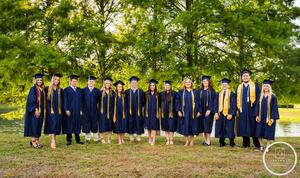 Members of Belmont’s Class of 2018 celebrated their academic accomplishments, willingness to serve and the momentous achievement of graduating high school at a special commencement ceremony May 18.

“The Class of 2018 has had an integral part of making Belmont what it is today,” said Ron Barker, Belmont principal.

During his speech, Gregory Barker thanked his parents, Belmont faculty, and his fellow classmates, who he encouraged to “create” their future.

“Your future is what you make it,” he said. “If you have a dream, follow it. Many people go through life doing what everyone else wants them to do...Don’t let the time pass you by, do something with it.

“My advice not just for high school seniors,” Gregory Barker said, “but for everyone: take the road less traveled. Make a name for yourself. That name doesn’t have to be accepted by everyone, but as long as you are happy, that is all that matters.”

“Though it may have not been the easiest way to get here, we should all be relieved because we finally made it!” he said. “To all the parents out there, you should be proud because tonight you get to witness your children start a new chapter in their lives.

“I also want to give a big thank you to all of the teachers here at Belmont who have taught me so many valuable lessons throughout the years,” Handy said.

Another special honor was given to Lindsay Grecian, the first-time recipient of a scholarship endowed by the Belmont Academy Charter School Business (BACS Biz) Leadership organization. Laura Lashley, Belmont teacher and BACS Biz coordinator, presented the award to Grecian.

“Lindsay has been an integral part in our organization during the 2017 to 2018 school year,” Lashley said. “Her leadership and creative ideas have been instrumental in making BACS Biz a success. She is a true leader that shows dedication and commitment to our organization and we wish her the best in her future.”

The accomplishment of the graduates collectively earning 370 dual enrollment credits through Florida Gateway College (FGC) was highlighted, as well as Gregory Barker, Handy, Bragdon and Whilden earning their Associate of Arts degrees from FGC.

Ron Barker also noted that the Class of 2018 had earned about 2,000 hours of community service, and that 70 percent of the seniors were on track to earn the Bright Futures Scholarship.

“The Class of 2018 has a heart for the school and for the community,” he said.

Each graduate was called on stage to receive his/her diploma, and tassels were turned.

“We know each of you will do great things in the years to come,” said Leslie Munden, Belmont guidance counselor. “We have watched many of you grow and mature in the last few years as you have accomplished your goals. We are truly proud of the young men and women you have become.”