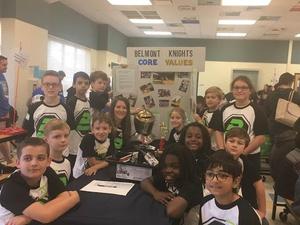 Robotics gives a great showing at the practice competition.

Saturday, December 7, marked the practice competition for the FLL Robotics teams around the county. Belmont is pleased to say that we won first place in this event. The team is hoping and planning to win the actual competition in January. Which would build up quite the streak.

Erin Adams, Belmont’s middle school science teacher and Assistant coach for the robotics team, explained that the team’s key to success is their determination, and hard work. As well as the hours of practice that are put into programming their robot. Collin Petersen, a seventh grade student and the team captain of robotics, elaborated on the head coach’s five core values: discovery, innovation, teamwork, impact, and,most importantly, fun. The team is compiled of around fifteen students from grades four to eight, and meet every Tuesday.